I suddenly recalled, this fourth week in Advent, that my book, A World Transformed: Exploring the Spirituality of Medieval Maps, contains a seasonal reflection! I decided to share it today as an excerpt. Read on for a gift from God via the wonderful world of the Hereford Map.

I will never forget the first time I caught a glimpse of God’s plans for the world. I was a teenager, and it was Advent. On Christmas Eve, the church in which I grew up held a Festival of Nine Lessons and Carols, a type of service that originated in England in the early twentieth century. The lessons began with readings from the book of Genesis and proceeded through the Old Testament prophecies about Jesus before culminating in the familiar Christmas story from the Gospels. I loved sitting through this long service. The hour was late. The church was candlelit. The lessons brought us closer and closer to Jesus. All was anticipation.

Yet what thrilled me most, what I remember most, was the first lesson of the service. The reading took us to the Garden of Eden, after the fall of humanity, when God reveals that Adam’s seed will bruise the serpent’s head:

And I will put enmity between you and the woman, and between your offspring and hers; he will crush your head, and you will strike his heel (Gen 3:15).

Waiting for Jesus, I was suddenly transported to the beginning of time. Christmas was revealed for what it is: not an isolated feast, but the center of a vast history that began in the mind of God and that will not end until the day of judgment. Driving home after the service, beneath a dome of glittery stars, I knew that Jesus was part of something incredibly big. And since I claimed Jesus, whose birth I was celebrating—or rather, since he claimed me—I was part of something big, too.

What a wonderful moment. My place in the world, my significance in the grand scheme of things, was presented to me like a gift from God. Since that night, I have tried to hold on to this certain knowledge of my significance. But it’s difficult. The world seems bent on putting me in my place—a very small place. As we all do, I face rejection on a daily basis. I compare myself with other people and come up wanting. I feel misused and overlooked. Sometimes, at the end of a difficult day, it can seem that God himself has forgotten about me.

History tells me otherwise. And when I feel small, I need a big dose of it—a dose the size of the Hereford Map. God’s people need to tell his story. We need to rehearse it, revel in it, and get lost in its grandeur. When we do, we realize how wide—and at the same time how welcoming—God’s story really is. Dorothy Bass reflects,

Amazingly, even though this story began before time itself and reaches beyond the end of time, it is a story that has room in its narrative for each individual who encounters it in the present day.[1]

When we get lost in God’s story, we find ourselves.

Bass suggests that we enter God’s story by celebrating the church year, which, through its liturgical seasons, takes us through key points in the “life of God.” I like the idea of paying attention to sacred history throughout the year, as I did at that Christmas Eve service long ago . . .

I find another point of connection to God’s story in the Hereford Map. Sitting down with a good reproduction of the map, I let history wash over me. My eyes roam over the map’s sacred sites, from Eden to Africa to Jerusalem to the gates of heaven. If you try this exercise yourself, you will see that the map organizes these sites in a particular way. It lays out salvation like a diagram. The creation and the birth of sin take place at the edges of the world, as if to show their distance from human experience and understanding. Jesus lies at the center. Time ends, and eternity begins, at the top.

In between these pivotal sites in the history of salvation, there is a lot of room—all the room in the world. There is room for the medieval Christians who were the map’s first users, and room for you and me. Room for our stories. Room for our mistakes. Room for our redemption. Room to recover our significance. 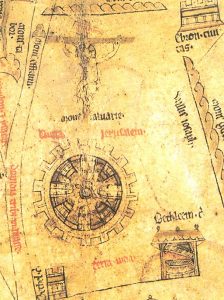 In fact, every follower of Christ finds herself on the map of salvation every day, in ordinary but breathtaking ways. Have you ever had a bad day? Have you ever let sin get the best of you and then knelt humbly to ask God’s forgiveness? That’s part of my day every day. It’s also part of the grand design of God. When we sin and ask forgiveness, we are playing our role in the drama of salvation—the very drama illustrated on the Hereford Map. We journey from the monstrous races at the edge of the world to the cross at the center. We make the journey of God’s saving grace . . .

Let us, then, learn to embrace our place in God’s plan. Let’s learn to think big. No more false humility. No more wondering where we belong or whether we matter in the grand scheme of things. We do matter. And we belong on the map of salvation.

Wow, I had forgotten how much I love my book! Let me clarify—I love what medieval maps allow us to see about God, his love, and his plan for humankind. Read more in A World Transformed.