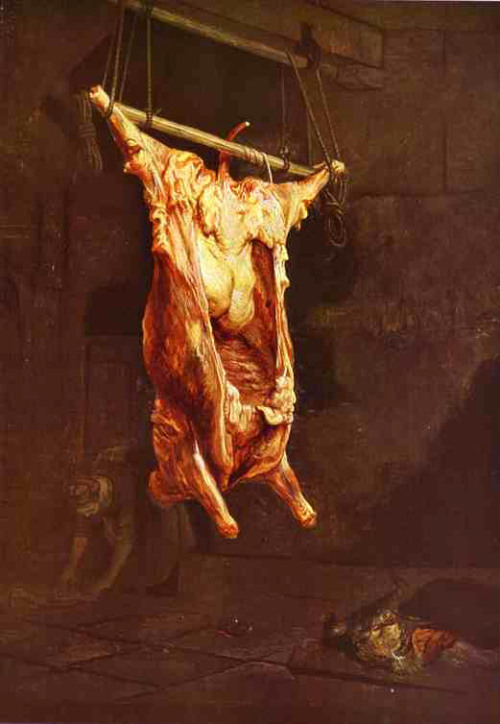 In his 1655 painting, The Slaughtered Ox, Rembrandt gives us a disturbing image. We come face to face with a giant ox carcass hanging from a cross beam, its hind legs splayed and skin flayed to reveal the bone, fat, and muscle beneath. The animal dominates the image space; the viewer can find virtually nowhere to look for relief. Even peripheral details, such as the wooden planks of the interior and the clothing of a woman in the background, take on the colors of the slaughtered animal; subdued browns, reds, and whites dominate. The painting belongs to the later, “impressionistic” part of Rembrandt’s career, as the rather loose brushstrokes indicate. But surely to segue into a discussion of impasto represents a thinly veiled attempt to divert attention from the reality of this image. There is no way to get around it: in his painting, Rembrandt offers not merely thick brushstrokes, but the convincing illusion of dead and soon-to-decay flesh.

I always have liked Rembrandt, but I never thought much about the The Slaughtered Ox. Certainly I never sought out this painting on my occasional visits to the Louvre, where it now hangs. With art history classics like Leonardo’s Virgin of the Rocks and Paolo Ucello’s Battle of San Romano in nearby galleries, why focus on an animal carcass? A few years ago, however, I found myself face to face with the kind of flesh that Rembrandt depicts. This time, my encounter took place not at a museum, but at the meat department of a large midwestern grocery warehouse. I had taken a job at the warehouse, called Roundy’s, where I sold all kinds of fresh and processed meat to grocery stores in a tri-state area. Suddenly, I was surrounded by the kinds of carcasses I previously had found so distasteful. In this most unlikely of situations, I discovered that Rembrandt and I—and his painted ox, too—had something in common.