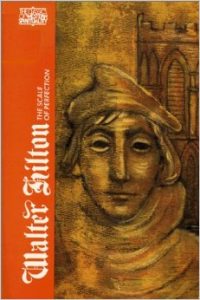 Walter Hilton was an Augustinian canon (a priest who takes vows and lives under a rule) known for his letters and treatises providing spiritual counsel. Evelyn Underhill calls him “One of those . . . quiet and secret friends of God who have never failed the Church.”

I’m in awe of many of the contemplatives and mystics from our Christian past. I don’t know if I’ll ever have that kind of faith. But in many ways, Walter Hilton is very accessible to us today. Here’s why:

Hilton struggled with his vocation – Hilton is a mystic for every person who doesn’t know what they want to be when they grow up. He began by studying law; then he may have lived as a hermit for a time; finally he joined the Augustinian order as a canon. It comforts me that this great Christian thinker did not have it all figured out (at least, not at first)! I also think it’s interesting that Hilton did not choose to become a monk – as a canon, his was a public ministry. He was drawn to monasticism but seems to have had a heart for “the world.”

He said that interruptions can be a way to serve God – We (okay, I) usually bulldoze ahead with our schedule and our priorities, especially if we think we’re doing God’s will. But in a letter to a wealthy layman, Hilton counsels us to accept the interruptions that inevitably come our way:

If you are interrupted in your devotions by your children, employees, or even by any of your neighbors, whether for their need or simply because they have come to you sincerely and in good faith, do not be angry with them, or heavy handed, or worried — as if God would be angry with you that you have left him for some other thing — for this is inappropriate, and misunderstands God’s purposes.*

I try to remember this every time my children come bursting in on me!

Hilton said that all Christians are called to the contemplative life – In the letter I mentioned above, Hilton told a wealthy layman that Christians “in the world” can open themselves to the love of God, just as cloistered monastics can. In fact, he encouraged the layman to adopt a rhythm of work and prayer in his active life.

Hilton helps us to see that wherever we are, we can love and seek God. Even in the active life, we can rest in God. We can walk with him and seek to be transformed into his likeness.

If you want to read some of Hilton’s works, I recommend the Epistle on the Mixed Life — the letter I quoted from above. Also, read his fantastic passage on the Christian life as a pilgrimage in his treatise, The Scale of Perfection. I wrote a blog post about it here.

By the way . . . it’s neat that the late medieval mystic Margery Kempe is remembered by the Church today, too. We know that she read some of Walter Hilton’s works! I love it when things are connected.

Lisa’s book, A World Transformed: Exploring the Spirituality of Medieval Maps, is on sale (Kindle version) for $2.99 for a limited time. Check it out and share the news!