Welcome to Part 3 of this blog series, in which I’m reviewing historical fiction set in the Middle Ages. Past posts concerned Pilgrimage by Lucy Pick and Down the Common by Ann Baer.

This week’s read is Doomsday Book by Connie Willis, the master of time travel fiction. I like this book for the juxtaposition of the seasonal setting—the “most wonderful time of the year”—with one of the worst epidemics in human history. I’ll explain why below. 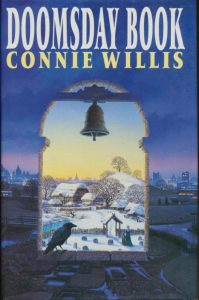 Doomsday Book is set at Christmastime in the years 2048 and 1348. Kivrin, an Oxford history student in the 21st century, takes a research trip to medieval England. She’s supposed to go to the year 1320 but ends up in 1348—right when the Black Death swept through England. At the same time, back in Oxford, a parallel epidemic hits, making it difficult for Kivrin’s team to rescue her. Stuck in the Middle Ages, Kivrin becomes the sole person able to tend plague victims since she has been inoculated against the disease.

When reading Willis’s novel, you’re going to have to get over a few implausibilities (other than the time travel itself). For example, no one in the year 2048 has a cell phone or any kind of mobile device; everyone’s always scrambling to get to a land line to make important calls (!). Just let that go.

But Willis gets many things right. There’s something about her characters and the surprising relationships they form that tugs at the heart. She gives the plague names and faces, painting an especially endearing portrait of a little medieval girl who can’t sit (or stand) still during a long Christmas Eve mass. Kivrin becomes close to this girl, who, like everyone else from the village in which Kivrin is stranded, does not survive the plague. This just about destroyed me. At the same time, it’s incredibly moving to see someone from another time—Kivrin—enter into the terrible suffering of a long-ago era. It’s a redemptive view of time, one in which humankind is called to help the past, one in which healing can take place across the ages.

Of course, Kivrin can’t “fix” the past. That would be against the laws of time travel. The medieval villagers see her as a kind of angel, but in the end, she can’t save anyone. But she can be a minister of mercy. She can love, and grieve, and, in the face of terrible suffering, never be the same again.

Every few years, I reread Doomsday Book, and I try to do so right at Christmastime. I find it a good antidote to the sentimentality of the season. There’s so much feel-good drivel at Christmas, so much mustered cheer and unthinking jubilation. Everyone just wants to feel cozy and warm and get the Christmas spirit. Willis’s book reminds us what the Christmas spirit really is: it’s the smallest of lights shining in the darkness. Christmas came because the world so desperately needs it. If you’re not feeling warm and fuzzy at Christmas, that’s good. It means you’re ready for a savior. That said, Doomsday Book is a good read any time of the year.

Thus ends this blog series on medieval historical fiction! What draws together the three books I reviewed is their refusal to romanticize the Middle Ages. None of them brings on sentimental nostalgia for the medieval era; none make me yearn to live there. Each book captures a difficult part of the Middle Ages—pilgrimage, peasantry, and plague—and shows how redemption enters in, even if it’s only through the cracks.