Skip to content
In last week’s post we discovered that it’s easy to idealize spiritual pilgrimage. As my friend Richard Littledale put it in his comment, “In allowing [pilgrimage] to become a metaphor of self-discovery we have chosen to gloss over its harsher aspects and cut it so free from its anchors that it can float free and attach itself to any worldview or philosophy.”

There’s nothing wrong with pilgrimage being used to describe many kinds of journeys or experiences. But it’s helpful to remember that, in the Christian tradition, spiritual pilgrimage describes, above all, our daily and life-long journey to the Jerusalem of our heart—to Jesus. There’s no way to idealize that journey! It is, at its best, lengthy, difficult, and unsafe.

It’s also easy to gloss over some of the harsh historical realities of physical pilgrimage. Take, for example, the Camino de Santiago, or the Way of St. James—the network of routes leading to the shrine of St. James in Santiago de Compostela, in northwestern Spain. The Camino was one of the most traveled pilgrimage routes in the Middle Ages and is experiencing a surge of popularity in our time. It’s estimated that in 2014, over 200,000 people walked this route.

I’ve yet to walk the Camino, but I certainly want to. One reason? It’s become so romanticized that it looks appealing. I don’t like physical exercise of any kind, yet when I see photos of pilgrims on the Camino, I’m ready for a three-month trek, just me and my backpack. I’m not so sure the Camino was this enticing in the Middle Ages. In fact, I would argue that this route has been almost entirely cut off from its medieval meaning.

Today, the Camino is a journey of self-discovery. It’s leisure travel. It’s a hiker’s challenge. It’s a piece of history. It’s 5 of 5 stars, according to one travel site. “Anyone can do it, and you can’t beat the scenery and the wine!” (I’m paraphrasing but you get the point.)

“Anyone can do it.” So why did medieval pilgrims do it? What made the Camino so popular? I assume the scenery was just as beautiful in the Middle Ages, but for the most part medieval pilgrims didn’t walk the Camino for adventure. I’d like to think they walked it as a way to practice or renew their faith. St. James, after all, was said to have brought the Gospel to Iberia and was thought to have been buried there after he was beheaded in Jerusalem. Compostela was a little piece of the Holy Land brought to Spain.

I’m sure faith was one goal, but there were others, and not all of them were pretty. I doubt the spectacular scenery would have made up for some of the situations that brought pilgrims to this route.

Vows – People who were sick or in danger often called upon a saint to help them, making a vow to go to the saint’s shrine should they be delivered. Reneging on such a vow could prove dangerous! The 12th-c. Miracles of St. James tells about a French soldier who vowed to go on pilgrimage to Compostela if St. James helped him in battle. St. James came through. The soldier went back on his vow and became ill to the point of death. Only when he began making plans for a pilgrimage did he regain his health. He completed the journey with the help of the saint. Making pilgrimage vows that were subsequently regretted seems to have been common, which means that many travelers on the Camino didn’t even want to be there.

Miracles – Most pilgrimage saints were revered for performing miracles of healing. St. James was no exception. Many pilgrims on the Camino would have been ill, perhaps even (literally) on their last leg. “The old pilgrimage roads must have been choked with the sick and dying,” muses historian and pilgrim Conrad Rudolph.* For such travelers, a pilgrimage was a journey of desperation. 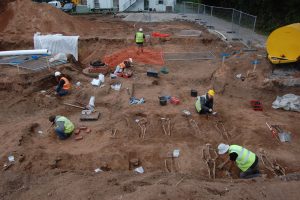 In fact, sick pilgrims have just made the news, some 900 years after their journey. A news story from yesterday reports that around 50 graves have been found at the pilgrimage site of Lichfield in England. The graves may belong to pilgrims who traveled to the relics of St. Chad in hopes of healing but died there or en route. The photo of archaeologists digging up these graves is sobering and drives home the point that not all pilgrims survived their journey.

Penance – We think of pilgrimage as a voluntary journey. But in the Middle Ages, many pilgrims were ordered by a civic court to walk to Compostela. Pilgrimage was considered to be an appropriate sentence for sexual and political crimes and even for murderers, who might walk the road with models of their weapons chained to their bodies. Read my recent essay about one of my favorite 15th-century artists who got sent on a penitential pilgrimage to a shrine along one of the Camino routes.

These weren’t the only reasons to take to the road in the Middle Ages. But even this short review shows that pilgrimage was not quite the enchanting walk pictured in travel photos today. In the Middle Ages, your traveling companions would not have been like-minded friends on a bit of a hike or a journey of self-discovery. They would have been distinctly . . . unsavory. They were people who had reneged on vows; who carried disease or were near death; who had committed crimes. Was pilgrimage comfortable or safe? No. Was it worth it? I’m glad I don’t have to answer that question.

Have you walked the Camino or another pilgrimage route? What was your motive or experience? I’d love for you to leave a comment below.

Be sure to tune in next week. I’m excited that Jeremiah Gibbs will be here to tell us about his experiences with the Camino!

*Conrad Rudolph, Pilgrimage to the End of the World: The Road to Santiago de Compostela (Chicago: University of Chicago Press, 2004), 5.

9 Replies to “Why Walk? The Camino de Santiago Then And Now”