For the second week in Advent, I’m thrilled to host friend and author Phil Steer with a guest post that challenges the way we’re usually told to think about God. Read on to see how the “offense of the Incarnation” changes everything about our relationship to God and the world.

In 1952 the English Bible scholar, translator, author and clergyman J. B. Phillips published a book, the title of which has since entered the Christian lexicon: Your God Is Too Small. In this book Phillips argues persuasively that:

The trouble with many people today is that they have not found a God big enough for their modern needs… It will always be by [a great effort of will that a person] either worships or serves a God who is really too small to command his adult loyalty and cooperation.

King Solomon would have agreed. Dedicating the temple in Jerusalem, Solomon prayed:

The heavens, even the highest heavens, cannot contain you. How much less this temple I have built. (1 Kings 8:27)

And how much less any box that we build for God from our own understanding. For no box is big enough to contain the One who is “the Alpha and the Omega, the First and the Last, the Beginning and the End.” (Revelation 22:13)

We cannot know the unknowable.

Our minds cannot contain the uncontainable.

Surely Phillips was right: Our God Is Too Small.

Whilst I agree with Phillips’s diagnosis (it is a superb little book, as relevant today as it was 60-plus years ago) I am convinced that we suffer equally from the very opposite malady: Our God Is Too Big.

When God gave humanity the ultimate revelation of himself, he didn’t come in greatness and power and glory and splendour and majesty. Instead, he came as a little child, as a helpless baby, totally dependent on his parents for protection and provision, for all that he needed to survive and to grow.

Indeed, more (or rather less) than this – for before becoming a child, before being born as a baby, Jesus was conceived and carried within Mary’s womb. He became for us God the Foetus, God the Embryo, God the Single Cell.

Do these names for God shock or offend you? I’ll admit, I hesitated as I wrote the words. But perhaps this just goes to show how far we have failed to fully grasp the scandal of what God has done for us. Paul writes of the “offense of the cross” (Galatians 5:11) – is there not also the offense of the Incarnation? God becoming one of us, with all the messy humanity that entails.

And this matters, because our view of God fundamentally affects how we relate both to God and to the rest of the world.

Think about it. God humbled himself – literally, came down to our level – that we might see him as one of us and relate to him as one of us. Our God knows what it is to be human and is able to empathise with our weakness (Hebrews 4:15). Jesus came as the friend of sinners (Luke 7:34) that we might be called his friends (John 15:15). If our God is too big, we will never grasp this essential truth.

God is so much bigger than we could ever conceive. But our Big God made himself small – smaller than we can truly believe. This is how he chose to reveal himself. This is what he wants us to see. And this is how he want us to be. For when God makes himself small, we have little choice but to make ourselves smaller still. 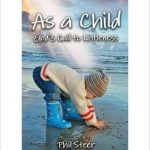 Phil Steer is the author of As a Child: God’s Call to Littleness which is being serialised in the prayer and spirituality journal ‘Quiet Spaces’, published by BRF. He is married with three children, works in the City of London, and lives in Romford, on the London/Essex border.

One Reply to “Your God Is Too Big”