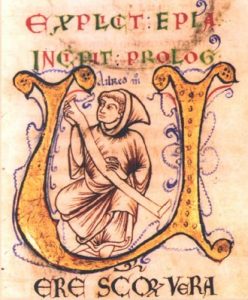 Today, as the world is stunned and grieving again, heed these words from Aelred of Rievaulx (1110-1167), abbot of the Cistercian abbey of Rievaulx in Yorkshire. In this beautiful passage from his De institutione inclusarum (The Formation of Anchoresses), Aelred exhorts us to pray and more than pray for a world in need:

What is more useful than prayer? Give it. What is more gracious than pity? Spend it. Hold the whole world in one embrace of love; consider the good to congratulate them, the wicked to grieve over them; behold the afflicted and compassionate the oppressed; call to mind the miseries of the poor, the groans of orphans, the desolation of widows, the sorrows of those who weep, the needs of pilgrims, the vows of virgins, the perils of men on the sea, the temptation of monks, the cares of the clergy, the hardships that soldiers endure. Open your heart to all, spend your tears on them, pour forth your prayers for them.

2 Replies to “Praying for a World In Need”