Sayings of the Dessert Fathers 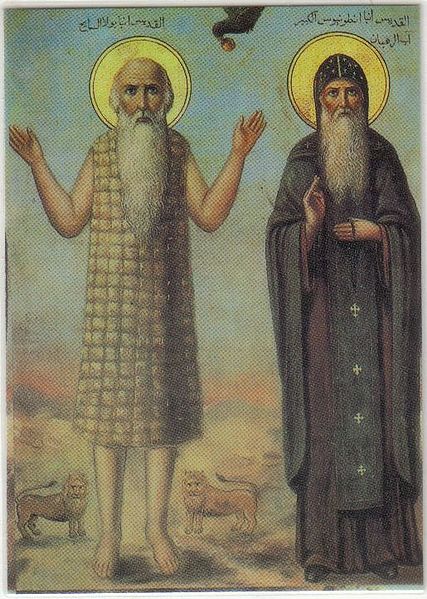 St. Paul the Hermit and St. Anthony (public domain image via Wikimedia Commons). Note the bird who is bringing them a cookie.

While doing research last fall, I found a previously uncatalogued manuscript in a European research library (I won’t name the library because it would probably embarrass them to have everyone know that they left a manuscript uncatalogued). The manuscript contained several standard prayers and a Life of Christ, but it really got interesting in the final few folios, which proved to contain an unusual selection of sayings from monks who lived around the time of St. Anthony and other Desert Fathers and Mothers. Based on the tendency of these sayings to focus on baked goods, as well as what appeared to be grease spots dotting the parchment, I dubbed this section the Sayings of the Dessert Fathers.

I transcribed and translated these sayings in the winter but felt I needed to wait until Lent was over to unveil them to the public. Further research is necessary to understand these sayings within the context of early monastic culture, but even a cursory glance reveals a wisdom that I think will surprise you. Where possible, I have indicated the source of each saying.

Here begin the Sayings of the Dessert Fathers –

Why, dessert cart, did I let you get away? I have often been sorry that I passed on carrot cake, never that I indulged. (Abba Arsenius)

Keep the hour in which you will eat the donut ever before your eyes.

Take away temptation, and no one will eat dessert. (Abba Evagrius)

An elder said, “He who does not receive all desserts as equal but discriminates, such a one is not perfect.”

An elder said, “She who has the last piece of pie with her does well not to bring anybody else into her cell.”

They used to say of Abba Arsenius that all his life long, when he was sitting, he had a rag on his lap on account of the crumbs that fell when he ate cake.

A soggy pie is the worst of all baked goods. It is the mother of all bad desserts. (Abba Peter of the Desert)

Ordering dessert does not require a lot of language. Reach out your hands, saying, “Give me that one.” (Abba Macarius)

An Egyptian hermit said, “If you desire a pilgrimage to TCBY, begin by getting in the car.” (Unknown source)

If you start on the cake, do not let a person discourage you. Your endurance will defeat the person. (Amma Syncletica)

God is equally pleased by all desserts. Whatever attracts you at the bakery is good. (Abbot Nestero)

What can get through all the traps of a sweet tooth? Humble pie. (Abba Antony)

In the same way a pudding is not ready until it has had time to chill, so it is with us. (Anna Theodora)

How can love function when there is a lack of freshly baked brownies? (Abba Elias)

Whatever helps us to get dessert, we must follow with all our might; whatever hinders us from it, we must shun as a dangerous and hurtful thing. (Abba Moses)

Abba Poemen said about Abba Pior that every single day he made a fresh tart.

For he was a man full of discernment and the good odor of freshly baked pie. (an Abba of Rome, probably Arsenius)

Someone asked Abby Anthony, “What must one do in order to get something sweet?” The old man replied, “… whoever you may be, always have the dessert cart before your eyes…”

When we turn our spirit from the contemplation of cheesecake, we become very hungry. (Abba Theonas)

I hope you enjoyed this selection of Sayings of the Dessert Fathers. I am diligently working to get a facsimile published soon. In the meantime . . . don’t forget to eat dessert first.