What I Wish St. Augustine Had Said 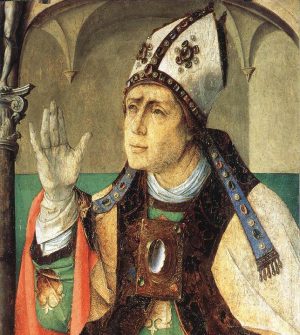 When I read Marilynne Robinson’s novel Gilead a few years ago, I was struck by something the character of John Ames proclaims towards the end of the story: “Augustine says the Lord loves each of us as an only child, and that has to be true.” (2004, pp. 245-46)

It certainly rang true to me. It’s hard for me to wrap my mind around the idea that God loves the whole world. Doesn’t he play favorites like the rest of us do? When I read that line in Gilead, I immediately took to the idea of being God’s only child. One of a kind. Special. Uniquely loved.

Historian that I am, I went to look up this quote in Augustine’s works. I was pretty sure it came from the Confessions. But try as I might, I couldn’t find it. As I searched, I came across the same loosely quoted phrase, with no citation, in a nonfiction book. And I’ve seen it other places on the web.

Finally, after consulting a friend who specializes in the early Christian tradition, I discovered what Augustine really said:

You are good and all-powerful, caring for each one of us as though the only one in your care.*

Here’s the context. Before his conversion to Christianity, Augustine’s mother, Monica, wept for his soul. God comforted Monica in a vision. Augustine writes:

How could this vision come to her unless ‘your ears were close to her heart?’ You are good and all-powerful, caring for each one of us as though the only one in your care, and yet for all as for each individual.

In this statement, Augustine paints a vivid picture of God’s overwhelming love. God rests his ear on Monica’s chest and listens to her heartbeat, her tears, her pain. In Monica’s moment of need, everything and everyone else fades from God’s view, and Monica becomes his only care and concern.

But Augustine did NOT say, “God loves each of us as an only child.” He does not explicitly cast God as a parent. Augustine might have been thinking about God as a father, but maybe not. Perhaps he was thinking of God as a pastor, a doctor, a mentor, or a teacher — someone who has another in his or her care. 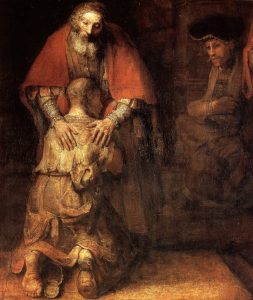 Rembrandt, The Return of the Prodigal Son (detail)

I have to admit that I’m disappointed. Having gotten it in my head that Augustine was talking about an only child, I found the real quotation to be somewhat watered down. I don’t want to be someone in God’s care. I want to be God’s child. You don’t run into your doctor’s or teacher’s outspread arms. You run into your father’s (or mother’s) arms. That’s the kind of care-giving relationship I crave — the complete trust and intimacy between parent and child. I know I have this relationship, for Jesus exhorts us to be “little children” many times.

But here’s the kicker — I want to be God’s only child. I yearn for the undivided attention of a beloved parent; to climb up on God’s knee and know that I am his only one. He’s not going to get distracted by the other children out there. He’s not going to run out of time or energy for me.

I’m not above acting like a child desperate for attention, either. “Look at me!” I cry out to God. “I bet those other kids can’t do a one-handed cartwheel!” Do you do that, too? (I mean the showing off, not the cartwheel.)

We look to the greats of the Church to tell us about our deepest longings. Augustine didn’t tell me what I wanted to hear, but he did teach me something about myself. My search for Augustine’s quotation, and my subsequent disappointment, reveals the state of my heart: a heart that’s desperate to be someone’s one and only.

I know I’m not alone in feeling this way, since this passage from the Confessions has been misquoted (perhaps a better word is paraphrased) more than once, even by the likes of Marilynne Robinson! I think it points to one of the tensions of the Christian faith — we have a God who stretches his arms around the whole world yet loves each of us as the one perfect and beloved child he’s always longed for. It’s a tension I’ll wrestle with for a long time, since I’ll always be a child at heart.

Lisa’s book, A World Transformed: Exploring the Spirituality of Medieval Maps, is on sale (Kindle version) for $2.99 for a limited time. Check it out and share the news!